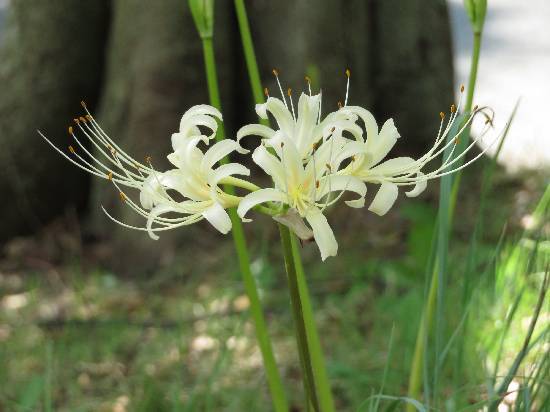 Higanbana flowers are starting to bloom.

The red flowers that can be seen in the ridges of rice fields around the equinoctial week in autumn are called "Higanbana" or "Manjushage", and the white flowers are called "Shiroka Manjusa". It is called Hana (White Flower Manjushage).

All of them are members of the licorice genus, and there are many varieties, some of which bloom as early as July, and there are various cultivars with flower colors such as yellow, orange, and pink, in addition to red and white. 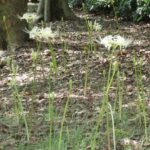 Photographed on September 14 / Along the garden path on the east side of the central flower bed (West side of toilet No. 13)

In Oizumi Ryokuchi, amaryllidaceae can be seen near the waterfall of Kakitsubata Garden, on the northern slope, and on the eastern and western slopes of the central flower bed.

As of September 14th, along the east side garden path of the central flower bed (west of the 13th toilet), white flowers have begun to bloom (9/13 flowering). The red buds will start to bloom soon. Red buds have come up near the waterfall in Kakitsubata Garden. The above spots will be in full bloom in a few days. 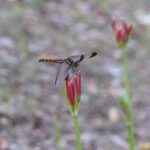 On the northern slope of the Kakitsubata Garden, red flowers bloom slightly later each year between the leaves of Hemerocallis. The buds have not risen yet and the best time to see them is likely to be the end of the month. 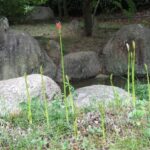 Photographed on September 14 / near the waterfall at Kakitsubata Garden