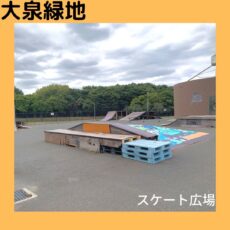 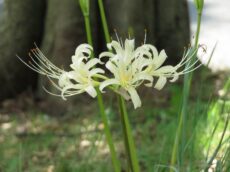 Botanical name: Higanbana Best time to see: From mid-September to late September Higanbana flowers are starting to bloom. Amaryllidaceae is a bulbous plant belonging to the genus Amaryllidaceae. The red flowers that can be seen in the ridges of rice fields around the equinoctial week in autumn are called "Higanbana" or "Manjushage", and the white flowers are called "Shiroka Manjusa". It is called Hana (White Flower Manjushage). All of them are members of the licorice genus, and there are many varieties, some of which bloom as early as July, and there are various cultivars with flower colors such as yellow, orange, and pink, in addition to red and white. Photographed […] 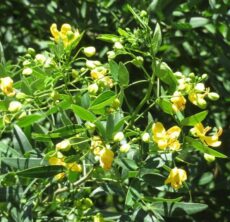 Botanical name: Hana senna Best time to see: From mid-August to October Hana senna flowers are blooming. Hana senna is an evergreen shrub of the legume family Senna genus native to Andersen in Brazil. It blooms a lot of yellow flowers when there are few flowers. It is distributed under the name of "Andean Maiden" and is also called Ashika, the former genus name. In Oizumi Ryokuchi, you can see it in the Hanazumi Garden and the Komorebi Garden. (The number of flowers of Hana senna in Komorebi Garden seems to be few this year.) ▶ Information on clover, sunflowers, crape myrtle, etc. here please look at. 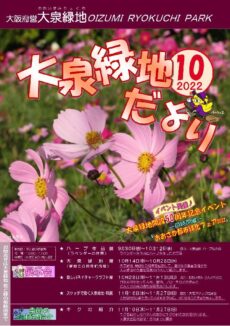 Various events are held at Oizumi Ryokuchi. ▶ Oizumi Ryokuchi October issue <Notice about the event> In order to prevent the spread of new coronavirus infections, events (exhibitions, seminars, events, etc.) posted on "Oizumi Ryokuchi Dayori" may be suddenly changed or canceled. increase. For details, see the Oizumi Ryokuchi website "Exhibition / Seminar" Please check it as it is posted from time to time. We apologize for the inconvenience, but we ask for your understanding and cooperation. 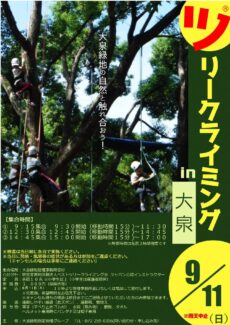 [Event announcement] 🄬 tree climbing will be held at Oizumi Ryokuchi again this year. Climb the tall trees in Oizumi Ryokuchi and get in touch with nature🌳! Date: September 11th (Sun) Reception starts: From 10:00 on Thursday, August 11, call (072-259-0316) or at the Oizumi Ryokuchi Management Office window ▶ Please see the flyer for details. 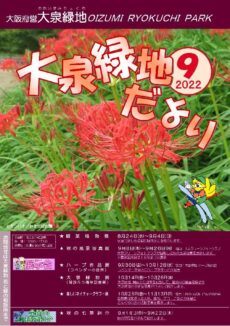 Various events are held at Oizumi Ryokuchi. ▶ Oizumi Ryokuchi September issue <Notice about the event> In order to prevent the spread of new coronavirus infections, events (exhibitions, seminars, events, etc.) posted on "Oizumi Ryokuchi Dayori" may be suddenly changed or canceled. increase. For details, see the Oizumi Ryokuchi website "Exhibition / Seminar" Please check it as it is posted from time to time. We apologize for the inconvenience, but we ask for your understanding and cooperation.

Two big events will be held at the same time in Oizumi Ryokuchi this fall! !! About holding an event commemorating the 50th anniversary of the opening of Oizumi Ryokuchi Oizumi Ryokuchi will celebrate its 50th anniversary this year. Therefore, a grand commemorative event will be held on October 22nd (Sat) and 23rd (Sun), 4th year of Reiwa, at the central flower bed and the large lawn plaza . The contents include "Light Truck Garden Contest", "Various Health-related Events", "Catering Car Opening" and "Oizumi Ryokuchi Dai Retrospective Exhibition"! !! As soon as the details are decided, we will update the homepage one by one. Don't miss the latest information in […] 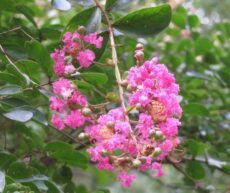 Plant name: Crape myrtle Best time to see: Mid-July to mid-September Crape myrtle flowers are in bloom. Crape myrtle is a deciduous shrub of the genus Crape myrtle in the Lythraceae family. The trunk is smooth and the scars become whitish when the pale brown bark peels off. The part that fell off was so slippery that the monkeys seemed to fall off the tree, so it was named "Crape Myrtle". There are red, purple, light pink, white, etc. flower colors, and the name is written in Chinese characters as "Crape Myrtle" because it blooms one after another for a long period from summer to autumn. In Oizumi Ryokuchi, you […] 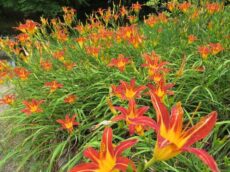 Plant name: Hemerocallis Best time to see: From early July to mid-July Hemerocallis flowers are in bloom. Hemerocalis is a perennial of the daylily family Daylily (genus Daylily). There are many varieties native to eastern Asia, and cultivars that have been bred in Europe, such as daylilies and daylilies native to Japan and China, are generally called "hemerocharis". Hemerocallis has another name of "daily" because it has flowers for only one day, but it blooms new flowers one after another. The flowering period is from May to October, but the time of flowering differs depending on the variety. In Oizumi Ryokuchi, yellow hemerocharis blooms from June to July in Fureai […]